Time for Wool and Something Marfy

It seems like we just welcomed in Autumn – and although the calendar says it will still be Autumn for a few more weeks, the chill in the air tells me that Winter is bearing down on the northeastern United States. Winter means many wonderful things, including WOOL season.

When I made my color-blocked coat last Winter, I purchased some extra yardage from Britex Fabrics with the thought of making a sheath dress to wear with it on occasion, but not exclusively with it. 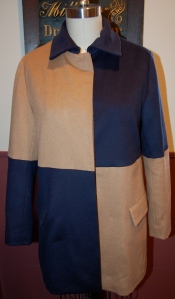 My original intent was to make a two-toned dress, with a front and back yoke with short sleeves. The bottom, longer section of the dress would be out of the camel wool, with the yoke and sleeves in navy, zipped up the back.   I did not think much more about it during the Spring and Summer, but a few weeks ago, after seeing a full page Marfy ad in a current Vogue Pattern Magazine, I began to think of an alternative to my plan. This dress was featured in the ad:

I not only really liked the dress, but it seemed designed with my two color-blocking fabrics in mind. I also liked its mid-century styling. For a while now I’ve been thinking of trying a Marfy pattern, and, I thought “Why not now?”

I wasn’t exactly sure what to expect. I knew that Marfy patterns come without seam allowances (the stitching line is the outside perimeter of each pattern piece), and in only one ordered size. One of the reasons I love vintage patterns so much is that they, too, were produced by particular size. (So that, for those of you who only sew from current multi-sized patterns, if you ordered a size 10, only a 10 was in the envelope.) Most vintage patterns include seam allowances, and the stitching line is marked as well. For those of us who use couture methods for our fashion sewing, having the stitching line marked is incredibly helpful. The stitching line is THE point of reference for alterations, for basting, for sewing. Knowing these two facts about Marfy patterns made me comfortable with the idea of sewing with them, even though they come with no written construction details other than a few notations on the pattern pieces.

What I did not expect was the teeny tiny package in which the pattern arrived. The only identifying mark on the folded up pattern was the pattern number.

I pressed the pattern pieces and got busy making my muslin (toile). From my adjusted muslin, which took the better part of a week to perfect (hopefully perfected, that is), I transferred sewing lines onto white silk organza underlining. (I will go into some of the changes I made in my next post on this dress.) In true couture mode, I then basted the organza onto the fashion fabric. It is always rewarding to sew the first “real” dart or seam! I feel like the dress is practically finished, although reality is sure to set in when all the finishing details start to occupy my time.

The front, showing the seam detail which I like so much. 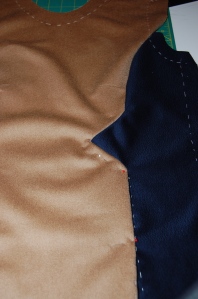 Incentive to finish this wool dress is fanned by Winter winds to my back , by looming holiday sewing, and the excitement of finishing my first Marfy.  To be continued, hopefully soon!

16 responses to “Time for Wool and Something Marfy”