“Unexpected,” “unusual,” “fascinating,” and even “a bit magical” are words used to describe some of the fabrics, prints and designs from the late ’60s/early ’70s (The Editor’s Letter, Vogue Pattern Book International, April/ May 1970.)  Although I have no documentation, I am sure that this red and white Moygashel linen is from those last years of the 1960s or early years of the ’70s. 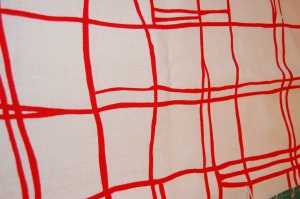 Of course, another clue to the age of this Moygashel linen is its width of 45″. Prior to about 1964, Moygashel was only available in 35 or 36″ width, as best as I can determine.

A quick look through some of my Vogue Pattern Book Magazines from this time period uncovered other fabric designs which have a similar feel to them. 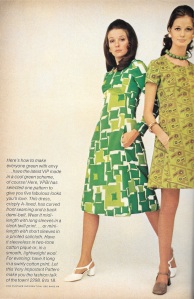 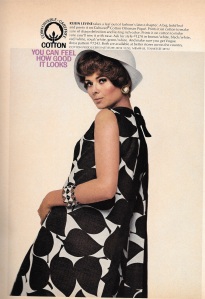 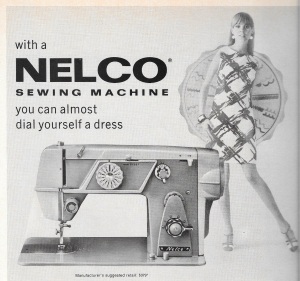 Even this sewing machine ad features a dress with an abstract geometric fabric design. Again, this is from the February/March 1968 Vogue Pattern Book International, page 24. 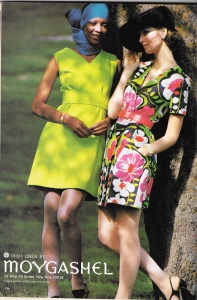 Interestingly enough, these demonstrative and colorful fabric designs were often sewn from the same or similar patterns as their more demure pastel and solid counterparts. I kept that in mind as I contemplated which pattern to use for this “unusual” and “fascinating” linen. Additionally, I wanted to pair it with a red linen belt  (which I ordered several years ago when I knew that Pat Mahoney was closing her custom belt and button business.  The red linen is some I fortuitously had left over from some of my sewing in the early 1970s.)

Then, after the recent success of my fairly dramatic changes to this pattern – and knowing I had a great muslin from which to work – I went with it again. 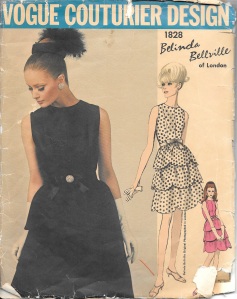 Here is the result:

I definitely had some issues with the very uneven grid.  I took a lot of pictures of the fabric arranged on my dress form before I started to lay out the pattern.  This helped me to visualize the areas which needed some regularity (if you can call it that!)  I realized quickly, in order to achieve a semblance of matching in the critical areas, I would have to accept way less than perfect in other areas.  Because the entire geometric design is so irregular, I have, I think, made peace with this decision.  (I haven’t worn the dress yet, so the proof of this is still to be determined.)

The bodice front seemed to me to be the most critical, and I wanted that three-striped horizontal motif to follow across the upper bustline. 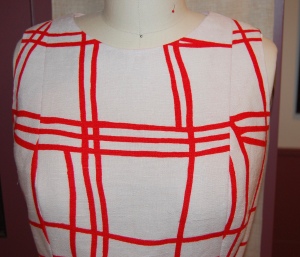 The back proved to be a bit more problematic, as three quarters of it lined up fairly well, with one section off on the left side.  Because the side piece wraps around the side (as in no side seam), there was only so much I could do in order to be able to “match” the front.  Additionally, I thought it was more important to have the back center seam, rather than the side back seam, positioned correctly, so that’s what I did.

Am I going to have the nerve to wear this dress?

I may end up loving it??

I lined the entire dress with a very lightweight linen cotton blend, eliminated facings for the neck and armholes, and finished those areas with a typical couture treatment. 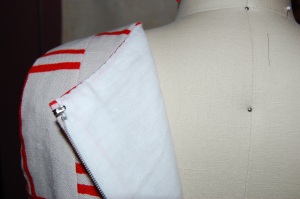 Because the skirt lining is unattached, I finished off the seams of the linen with Hug Snug rayon tape. 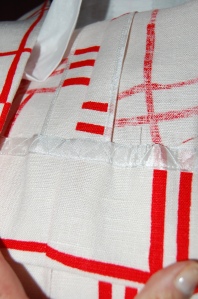 I did not use a silk organza underlining, as I like my linen dresses to be washable. Without that inner layer of organza, I had to be very careful with sewing the hem, to try to make it as unnoticeable as possible.

I doubt I will have a chance to wear this dress yet this Fall.  The later it gets, the odder it will look.  That’s okay.  I’m ready to move on to something more subdued – but hopefully “a bit magical” will still be in the equation.