I was working in center city Philadelphia in 1976.  The venerable John Wanamaker Department Store was just a few blocks away from my place of employment – and often I would grab a quick yogurt and crackers for lunch and then head over to the Fabric Department to spend the remainder of my lunch hour dreaming among the bolts of silks and linens, cottons and wools.  It was about this same time of year – mid-March – when I saw a notice about a fashion show, which was going to be held at the store.  It was to feature Vogue patterns, and the sole fabric of choice was to be American-made silk.  Well, this was quite enough to make a girl’s heart go pitter-patter; this was one show I was not going to miss!

When the appointed day arrived, somehow I carved out the time from work and scurried off to the top floor of the Wanamaker building which housed the “designer fashions” department.  I was feeling a little young and naïve among the well-dressed ladies in attendance, but that did not deter me!  I was in heaven as I saw one gorgeous outfit after another, all in glorious colors of the most beautiful silk fabrics.  I came away with the printed “program” from the show and have kept it all these years.  Here is the front of it:

The symbol for American Silk featured on the cover of the Program is still used today.

I came away with a couple of other things as well – a Vogue pattern which had been featured, and a piece of American silk in which to make my chosen design!  First, however, a few words on the company which sponsored the Show – and a few peeks into the rest of the printed program.

Here is the statement at the bottom of page two of the Program:

“All fabrics in the show are pure silk and made in America by the American Silk Mills Corp. and distributed to the over-the-counter market by Logantex, Inc.  You will find the fabrics in the colors in the show as well as other favorite colors in the fabric department.  Fashion note:  the identical silk fabrics are presently being used by leading American designers in their spring and summer ready-to-wear collections.”

American Silk Mills is still in operation, but it seems they are no longer producing dress goods, just drapery and upholstery fabrics.  Logantex is still a distributor of fabrics.

The Show was conducted by Charles Kleibacker, whom I remember as very charming and very sophisticated on stage.   He was known as “Master of the Bias” and gave some styling and sewing tips that day on using the bias in dressmaking.  He died in 2010 at the age of 88.

The show was divided into five “scenes”:  Day Dressing in Silk, Sporty Silks, Silk Chic – The Layered Look, At Home in Silk, and Evenings in Silk.  Twenty-eight patterns were featured in twenty-four “looks”.  The diagrams of these outfits are in black and white, but the colors and types of silk used for each are designated in the  descriptions.  Here are the four pages of designs (click on the images to see them enlarged):

Not all the Vogue patterns featured were from their Designer Series, but of those that were, they were all American designers - very appropriate for the Bicentennial Year!

The sailor middy and skirt outfit shown at the top of the page was memorable in its Fire Engine Red, Canton Navy Blue and White. 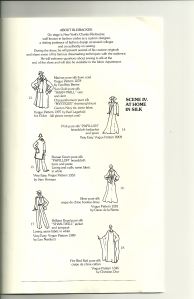 You can read some more about Charles Kleibacker at the top of this page from the Program.

The designs on this page give a good feel for the various weaves of silk which were featured in this show: crepe de chine, "Shan-Twill", broadcloth, and linen. Shantung was also one of the weaves.

Reading the color descriptions and combinations is totally inspiring.  For example, View 6 featured Shocking pink, Pure pink, and Blossom pink.  Olive and Pistachio were paired in view 8, while view 13 brought Mariner blue, Sun gold, Chrysanthemum, and Canton Navy together in one stunning outfit.  View 24 was a fabulous finale piece in Straw, Apricot, Desert Coral and Wheat.

However, the colors which spoke to me the most that day were the Hyacinth silk linen, the Desert coral silk linen and the Melon twill.  I could only afford to buy one length of fabric – I opted for the pattern shown in View 2, an Anne Klein shirtdress –  and I purchased the hyacinth blue silk linen.

I made a wide self belt and wore this dress with the collar up in back as pictured.

Here is all I have left of the fabric, two scraps! 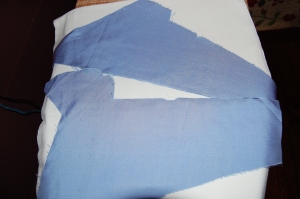 This photo cannot show you the depth of color saturation, nor the perfect weight and weave of this silk linen.

I remember wearing the dress to parties and feeling very happy.  Isn’t that what beautiful clothes are supposed to do?