Much has been made of the legend of Betsy Ross and the making of the first American flag.  Although the facts of the legend can be disputed, Betsy was, above all, a talented craftswoman, a wife, mother, grandmother, and patriot.  The definitive biography of Betsy Ross, Betsy Ross and the Making of America, was written by Marla R. Miller (member of the Department of History at the University of Massachusetts) following years of research, and published in 2010. Although I read it almost two years ago, I still reflect on the fascinating facts I learned from it and the captivating story it told me.

The book jacket of this excellent biography.

In it, the reader is introduced to an amazing woman, who was married and widowed three times, had seven daughters, helped raise several nieces in addition to her own children, and who eventually was grandmother to over 24 children.  And – throughout her life, she sewed for a living, doing upholstery, drapery and mattress making, and of course, flag-making.  Marla Miller’s biography reads almost like a novel, and by the time I finished it, I was in wonder at how much Elizabeth Griscom Ross Ashburn Claypoole accomplished in her 84 years.  For anyone who sews, or enjoys history, or simply wants to know what life was like before, during and after the American Revolution, I cannot recommend this book highly enough!  It’s a great read.

So – here’s to the memory of Betsy Ross, talented and gentle American artisan, on this Independence Day 2012.  May all of us who love to sew strive to leave such a legacy with our own needle and thread. 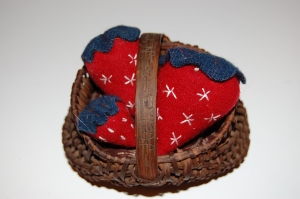