For several years my mother-in-law had a sign on her refrigerator stating “So many men… So little time”.  As a wife and a mother of three sons, I guess she was either telling the truth – or maybe doing a little daydreaming.  I don’t post things on my fridge, but if I did, it might read, “So many patterns… So many decisions”.  And that, too, would be a combination – of the truth – and quite a bit of daydreaming!

Usually as I am working on an item, I am already thinking about the next one – and I often know what pattern I’ll be using next.  However, I finished my silk tunic not quite decided yet.  I figured I was ready to tackle something a little more complicated, after the easy construction of the tunic (and a few days off doing other things!)  So what was it going to be?  I had it narrowed down to these five patterns/projects:

1) View B of this dress (for summer), made up in a Moygashel linen, with a contrasting belt.  This pattern has persistently been popping in my pattern box ever since I purchased it on Etsy  in early January.

The length of this dress as shown on the envelope is very 195os. I’ll be making it in knee-length.

2) No, this pattern is NOT vintage.  I signed up for The Couture Dress class taught by Susan Khalje on Craftsy, and this is the dress pattern which is sent with class enrollment.  Actually, views A and C both have a 1960’s feel to them – classic and chic!

So – what will it be? Sleeveless or short sleeves? It will definitely be the straight-skirt version. And I love the square neckline.

3) Ah, Molyneux!  Another short-sleeved dress to be made in linen.  The seaming detail is so lovely on this design.  I will have to practice my “pouty” look, however, if I hope to look an inch as good as the model on the envelope. 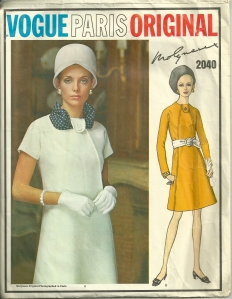 The kimono sleeves have gussets, which will make this dress comfortable to wear.

4) After missing out on several Diane von Furstenberg-designed patterns on eBay, I was very excited to find this one in my size on Etsy in mid-May.  What is it about D von F’s dresses that makes them so timeless?

I owned this pattern in the ’70s, when I bought it for $1.50 at my local fabric store. Sadly I didn’t save it or the dress I made from it, so I had to buy it again! I originally made it up with short sleeves, but now I prefer the sleeveless version.

5) I featured this pattern in a post shortly after I started my blog.  Whether you call this a “swing” coat or a “clutch” coat –  it’s 1950’s style has been in my mind for months!

I love this coat with the sleeves pushed up, as shown in blue.

The truth of the matter is that I will eventually be making dresses or a coat from all these patterns, but as I usually work on only one project at a time, I had to choose just one.  Which one?  It is underway as the thread- and scrap-covered floor of my sewing room will attest!  I made my decision . . . but I have many stitches to go – and many stitches to go – before I can post it.