A Blouse by Any Other Name Would Be the Same

I usually work on only one project at a time, but for the past three weeks I’ve had  two going strong.  I’m furiously working on a “dressy” suit – which needs to be completed this week!  However, last winter I made a mental note to myself to use up the fabric remaining from another suit, to make a matching overblouse.  I knew the pattern I was going to use, and with my newfound techniques from Craftsy’s The Couture Dress  online course, I knew this “small” project would be a great way to practice those skills.   So, I thought, “Oh, I’ll just throw this together in no time at all.”  Why do I ever think such things?  I must be either an eternal optimist or totally divorced from reality.

I have always loved sleeveless overblouses – also known as “shells” and sheath tops.  They were particularly popular in the late 1950s and 1960s with or without sleeves (during which time I also knew them as “jerkins” or “weskits” – which are really synonyms for vests).  Fairchild’s Dictionary of Fashion describes an overblouse as “ Any blouse or top worn over the skirt or pants rather than tucked inside.”  And here’s what they say about a “shell”:

A number of my ‘60s patterns show overblouses paired with suits or as part of two-piece dresses. 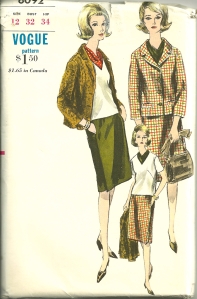 This v-neck overblouse is a great pairing with this sporty suit.

The description on the back of the envelope says this overblouse “may be tucked in”. 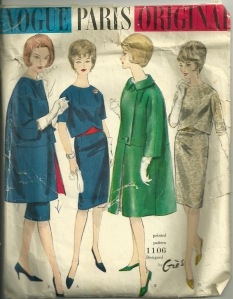 This design by Gres shows a boxy overblouse and skirt combination.

I particularly liked this pattern, with its Dior darts, the slits at the front hem, and its back zipper.  (I was able to pick up a refined separating zipper when I was at Britex in September – many are suitable for outerwear only and too clunky for something like this.)

View D is my choice.

Here is another example of an overblouse with Dior darts, which forms part of a two-piece dress.  Note that the zipper is on the side:

This design was featured in the August/September 1957 Vogue Pattern Book magazine.

I dutifully made up my muslin, to which I made a number of adjustments (lowering the bust line/darts, shortening the darts in the back, lowering and widening the neckline a bit, adding a little more girth to the hipline so it would slip over my matching skirt without buckling, and adding about two inches to the overall length of the blouse.   Hm-m-m, is that all?)  I underlined it with silk organza, matched the plaid everywhere I could, keeping in mind how the windowpane check would line up with the skirt.  I secured all the seam allowances with catch-stitching, and then I hand-picked the separating zipper.  About this time I quietly panicked when I realized how much time I had already put into this blouse!  I put it aside and started working on my suit, with a promise to myself to put in a bit more time on the overblouse whenever I had just 30 or 40 minutes “extra”, whatever that means.

Somehow I have managed to complete it, and I think I’m on track to finish my suit in a day or two, as well.  Whew!  Here are some of the details: 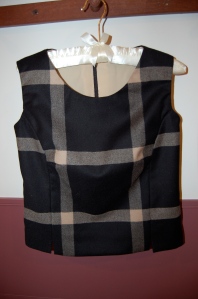 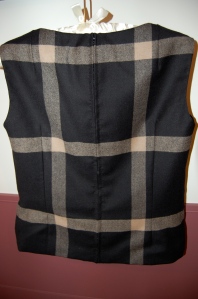 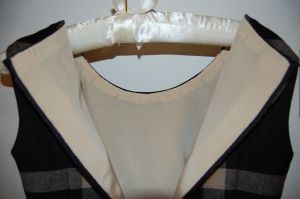 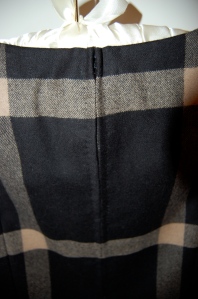 . . . and a look at the hand-picked zipper. This was the first separating zipper I think I have ever put in – and I am happy with the results!

And here is the finished blouse/overblouse/shell/sheath top, shown with the skirt:

An impersonal view, for which I apologize – no tangling with the tripod and camera timer today!

Just as I appreciate the preciseness which couture sewing makes possible when sewing something as “simple” as this shell, so do I also appreciate the many variant words to describe this type of blouse.  My personal favorite name for this blouse?