Wrapping My Mind Around a New Dress for Fall

I am not sure why, but I have been obsessed with wrap dresses lately.  I think it began in May when I wore the dress I made last summer from a mid-‘70s Vogue Diane von Furstenberg pattern.   It seemed to make a hit whenever I had it on – and there is nothing like a compliment to make one try for a repeat!  I just needed to find the perfect fabric – and another perfect pattern. 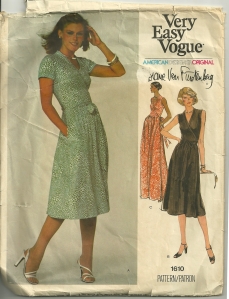 I made the sleeveless version of this dress in a red and white print.

The perfect fabric turned out to be the easy part of the equation.  One of my classmates in Susan Khalje’s Classic French Jacket Class chose this silk charmeuse for her jacket lining:

I loved the design so much that I asked for a swatch of it while I was at Mendel Goldberg Fabrics in NYC with my classmates.  Well, you can guess the end of this part of the story.  A few weeks after arriving home, I called up Alice at Mendel Goldberg and ordered some yardage.  I could picture this fabric as a wrap dress with ¾ or bracelet-length sleeves.  However, it is a woven fabric (of course), and even though it does have a slight stretch to it, those vintage Diane von Furstenberg patterns require “stretchable knits”, even including a stretch gauge on the pattern envelopes to ensure success.

Out of curiosity I went through my collection of vintage patterns to see what other “wrap” dresses I could find, and although none of these three were quite the look I wanted, I was struck by the variety of wrap dress patterns available, obviously some long before Diane von Furstenberg made them so popular.

This pattern is copyright 1960. “slightly gathered skirt back of the sleeveless, easy-does-it dress wraps around plain front to fasten at waist-line with tied belt.”

A thumbnail diagram on the back of the pattern envelope. “Dress opens flat for ironing.”

Here is a slightly more elegant wrap dress, also from the early ’60s:

Actually, just the skirt is a wrap on this dress, which has so many different looks, all of them quite stunning.

Finally this Pucci design, which is another elegant wrap dress: 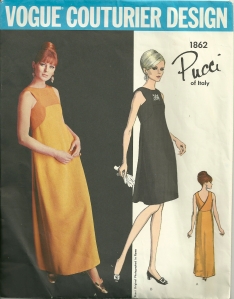 “Slim, high fitted dress in evening or street length has wrapped back closing, soft side back folds.”

It was about this time that the September issue of Threads magazine arrived in my mailbox.  Now my obsession was in full force, as the main feature article was on Wrap Dresses: Easy to Fit and Sew. 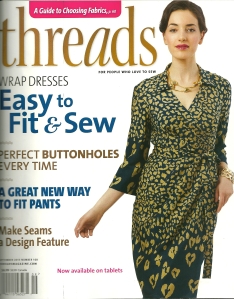 I liked the dress featured on the cover – which happens to be a new Vogue pattern (V8784).  I also liked the fact that it does not require a knit fabric, and that it is to be lined (I could make it using couture techniques).  I did not like the sleeves, however – too baggy and shapeless.

I could not get around the idea that the look I thought I wanted was this D v F dress, featured on the front cover of Vogue Patterns for September/October 1976:

This presented two major problems, however,  First, I do not own this vintage pattern (yet), which commands high prices when it comes on the market.  And second, even if I did own it, my woven silk fabric would not be appropriate to use for it.

Well, this second part of the equation was beginning to be a problem.  Then, quite by luck, I stumbled on a Simplicity pattern from 1976 in an Etsy store.  The pattern  is obviously a knock-off of the classic Diane von Furstenberg dress I like so much.  However, it is for woven fabrics!  It was in my size, which I took as a “sign” that I was supposed to buy it – which I did.  I thought my search was over.  With a few minor adjustments to the “extreme” points on the collar and the cuffs, I felt sure this pattern would work.

I really don’t think there is anything “JIffy” about this pattern . . .

A few weeks passed as life took me in other directions and with other projects. Then, finally, I eagerly started on the muslin for this dress.   I was eager, that is, until I realized that the pattern piece for the sleeve is missing –  and the pattern is going to require many more alterations than I usually have.

This is not fun.

There – I feel better now that I have said that!  So my quest for the perfect pattern has been a challenge, but it’s not Fall yet.  By hook or by crook, I’ll be wearing a new silk wrap dress before the trees gently release their leaves into the cool, crisp autumn air.