B is for Baby; Q is for Quilt

Despite thinking for the last several years that I would probably never make another quilt, in 2013 I found myself digging through my quilting cottons.  Cuddly little babies and little snuggly quilts seem to go hand in hand – and I just could not imagine our new grandchild without one made specially for him or her.

I have always been a traditionalist when it comes to quilts, preferring classic quilt patterns to modern art quilts.  There are a few of those patterns which I have gone back to time and again, and my favorite quilt design is a Princess Feather.  Maybe because of this, when I asked my daughter (before we knew “girl” or “boy”) what she would like for a baby quilt, she chose a Princess Feather.  I must admit my heart kind of sank at the prospect of making another one of these complicated designs.  Of course, I was not about to tell her that – and so I began to plan a Princess Feather quilt for Baby Unknown.

For those of you unfamiliar with this American quilt design, here is a little background on it.  The pattern began to appear in the mid-1800s, and was very popular, despite its complexity, on the East Coast of the United States.  A group which took to it with great exuberance was the Pennsylvania Germans who populated the southeastern part of the state of Pennsylvania.  (Both my husband and I are descended from this group of immigrants.) It is thought that the pattern evolved from printed images of the Prince of Wales of Great Britain, whose hat apparently was adorned with a great feather plume.  Its nomenclature probably started out as Princes’ Feather and gradually became known as Princess Feather. 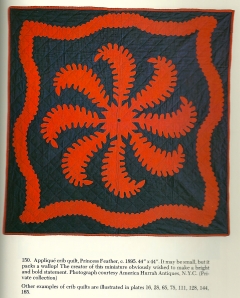 It was rendered in many different colors, but the classic version of it is with a white background, with alternating feathers in red and green.

Here is a large classic red and green antique Princess Feather quilt from a private collection.  The handwork on this quilt is exquisite.

This has always been my favorite color combination for this pattern, and so I decided to make it with red and green on white as the basic colors.

I was not very conscientious about taking pictures of the quilt in progress, so most of these details are of the finished quilt!

As I started my work on the appliqué feathers, I got really bogged down.  I just found it difficult to work on a quilt for a little person whose personality I did not know, not to mention its sex!  I realized I was not going to have this quilt done for the arrival of what turned out to be our little granddaughter Aida.   So, I reset the finish date to be for Christmas of 2013.  That seemed reasonable to me (however, I did not mention a word of this new timing to our daughter.  For all she knew, I had given up work on it!)

Over the summer, as little Aida’s personality began to emerge, the quilt took on a life of its own as I tried to match the design of the quilt to her charming playfulness and constant smile.  The central feather pinwheel surrounded by a narrow vine, provided the perfect small spaces for happy appliqued animal figures.  The large spaces in the corners definitely needed beeskeps, with swarming little busy bees to duplicate her constant motion!

The beeskep shape is from a cookie cutter, but I concocted the stand.  Hope the kitty does not get stung!

I used cookie cutters for almost all the animal shapes.  The animals I chose were:  cats, dogs, chickens, geese (the goose cookie cutter I used is actually one that our daughter made in a Colonial Craft Camp when she was about 8 or 9 years old!), and pigs.

Here are the geese and pigs.

Here are the dogs.

I used rickrack to embellish the chicken.

Then, as a lover of old baskets, I added two basket shapes, which hopefully Aida can fill to their brims with her imagination some day! 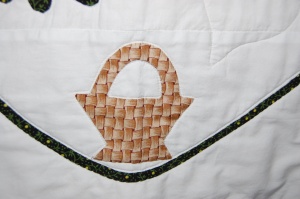 A tiny basket, waiting to be filled.

Once I got the animals and shapes appliquéd onto the white background, I laid it out on the floor for scrutiny.  Something was just not right with it.  It needed something else.

This quilt needed something else…

It came to me quite quickly that it needed something more around the outer edge – like an undulating border.  I cut a sample out by freehand for one side – and voila!  More handwork and that did it. 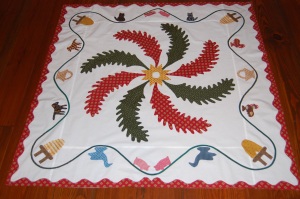 With the red undulating border added. Ready for basting the layers together.

By this time, it was early November and I was beginning to panic.  I had forgotten how much work there is in a quilt, even a small one!   I got it basted together after taking forever to decide what type of backing to put on it.  I don’t like to use boring plain white backgrounds, but with a white quilt, I did not want to use a dark or heavily figured backing.  After much looking and thinking, white with small red polka dots seemed happy and fun. 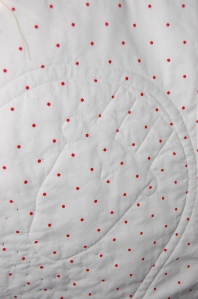 Polka dotted cotton for the backing.

I had never machine quilted a quilt before, but I knew this would have to be the first. (I never really enjoyed hand-quilting – in stark contrast to hand appliquéing, which I love to do.)  An ailing shoulder and a looming deadline convinced me to make this small concession.  The only exception would be the very center circle and the swarming bees, which would have to be done by hand. 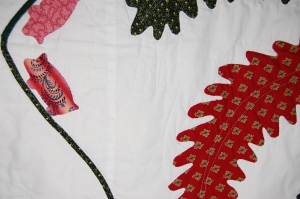 I always like to quilt an adult hand as well . . .

Exactly one week before Christmas Eve, I completed the quilting.  All I had left to do was to apply the binding.  Three days later (with everything else about the Christmas season and preparations bearing in on me – HELP!!), I finished the binding.  A gentle wash, signing the quilt in indelible ink – and the quilt was done, just in time to be wrapped before Aida arrived with her parents on the Saturday before Christmas.

I suspect I’ll be making many things for Aida over the years – and maybe even doing some vintage-inspired fashion-sewing for her one day.  But there is so often something enduring about a quilt, that sets it apart.  I hope this quilt has that quality to it, for our dear little girl who has already enriched our lives in ways, like the bees, too numerous to count…