Do You Do Pink?

Apparently, pink is a controversial color. Or maybe “was a controversial color” is a better statement. A recent article by Nancy MacDonnell in the Off Duty section of The Wall Street Journal (“Making Peace with Pink” February 11-12, 2017) makes a case for the appropriateness – and timeliness – of pink even for those who think they don’t like it. While I am one who thinks pink is always in fashion, it turns out that this Spring, it really is in fashion! According to Ms. MacDonnell, “On this season’s runways, pink predominated.” The different fashion houses showed varying interpretations of pink: Michael Kors was “brisk, All-American, [and] cheery.” J. Crew was “equally upbeat,” while Valentino showed pink that was “lush and romantic, with intricate appliqués and historical references…”   The list goes on and on. The unifying thread (pardon the pun), as claimed by the designers, was the lack of traditional “sweetness” associated with pink, with emphasis on the feminine power inherent in the color.

Looming large on page 58 from the November 2016 WSJ Magazine is a Valentino coat, quite traditional in design, but made very special by its stunning appliquéd pink wool.

According to Dr. Valerie Steele, the Museum Director at the Fashion Institute of Technology in New York, who was quoted frequently in Ms. MacDonnell’s article, the idea of pink as a feminine color did not take hold until the 1950s. Back in 1954 when Christian Dior wrote The Little Dictionary of Fashion, his entry on “pink” stated: “The sweetest of all the colors. Every woman should have something pink in her wardrobe. It is the color of happiness and of femininity.”   He even used pink throughout his book for illustrations, chapter headings and the title page. He recommended pink “for blouses and scarves; … for a young girl’s frock; it can be charming for suits and coats; and it is wonderful for evening frocks.” Who can argue with that, be it 1954 or 2017?

This page from the June/July 2013 issue of Town and Country Magazine gives an interesting timeline of the color pink, “how the color of little girls and baby dolls came of age”: 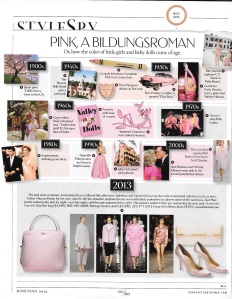 I particularly like this statement from Laura Vinroot Poole, the founder of boutique Capitol in Charlotte, N. C., quoted in The Wall Street Journal article: “To wear pink, you have to be an interesting and smart person… You have to have things to say. In pink, you can’t hide.”   Nor would you want to.

Personally, pink is my favorite color. I am always drawn to it, regardless of its hue. And its hue covers a huge range from palest pink to deepest fuchsia, from bubblegum pink to raspberry red. In thinking about pink for this post, I gathered this stack of pink fabrics from my collection. Just looking at it makes me happy! 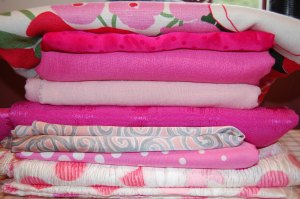 The only controversy I have with pink is deciding which hue of it I like best.