A Three-Piece Outfit for the Holidays: Part One, The Blouse

“Today blouses are not worn quite as much as they used to be and I think it is a pity.” So said Christian Dior in 1954. With that in mind, hopefully he would have approved of this Vogue blouse pattern from 1958:

You have already seen my toile of this blouse, where I worked out all the “kinks.” I liked it made up in muslin and now I am quite thrilled with it made up in silk dupioni, purchased from Britex Fabrics.

The iridescent quality of silk dupioni woven with two contrasting colors, such as this one, makes it an excellent fabric to use for “fancy” attire. The only reservation I had was whether it would be too stiff for use in a blouse. It is by nature rather “papery” in composition. I was a little concerned it might not have enough drapeability for this blouse, where a major focus is on the softly pleated sleeves. I did a little research, and of course, the first guideline I found was an admonishment not to wash dupioni! Doing so would diminish that papery nature. Well, that was exactly what I wanted to do – soften it a bit. Further research led me to an article in Threads Magazine from a few years back, where, indeed, a reader had successfully washed dupioni in her quest to make it suppler. Off to my washing machine I went with a large swatch for a (successful) trial run. Soon the entire two yards were gently swashing around in cold water on the delicate cycle. It took quite a bit of heavy steam to wrestle out the wrinkles, but I was left with a soft, drapeable fabric for my blouse.

Quite apparent in this image are the two contrasting threads, one fuchsia and the other bright yellow, which, woven together made a shimmery apricot color.

Buttons for a blouse such as this one are an important element. I knew they needed to be special, and what could be more special than vintage glass buttons from France? I found these listed in an Etsy store (YumYum Objects).

These glass buttons have silver accents, adding just a bit more depth to their appearance.

The listing was for a set of 6, and I needed 8 for this blouse. The French cuffs required two buttons each. These buttons were too perfect to pass up, however, so I decided I could use two buttons of another style for the rear-facing part of the cuff. I found a set of little, clear glass, ball buttons in my button box, which seemed appropriate and a good compromise!

The ball button on the back.

For some reason I always like to make sleeves first, so that is what I did. The French cuffs, by their very nature, of course, call for two buttonholes with two buttons looped together to thread through those openings, one on each side. However, I placed a buttonhole on the front part of the cuff only. I then sewed the two buttons together, back to back through the back part of the cuff, with the fancy button meant to thread through that single buttonhole and the other button to be stationary. I liked the idea that this method would hold the two sides of the cuff more tightly together.

The fancy glass button on the front.

This view shows the three pleats in the sleeve. In addition, there is a small amount of gathering which adds to the blouson effect of the lower sleeve.

Being a pattern from 1958, the instructions called for bound buttonholes, of course. However, due to the nature of the fabric, I decided machine buttonholes would make a nicer finish, so that is what I did (with a little hand-finishing on each one…)

The rest of the blouse was quite straightforward. 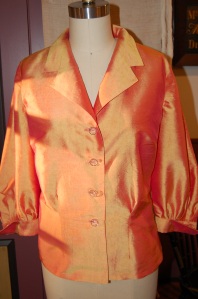 I took this picture with the sun streaming in one of my sewing room windows. It really shows the luminosity of the fabric. 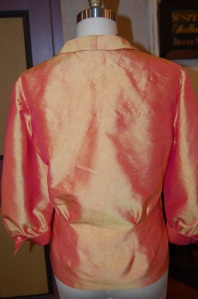 I am so happy I decided to keep the released darts at the waistline. I think they will work beautifully with the skirt I have planned.

I gave my usual attention to hand-finishing the hem and facings (it just looks nicer!) and marveled again at the finesse added to this notched shawl collar by that small dart in the collar crease. Hopefully you can see this detail here:

Next up is a guipure lace skirt! I wonder what Christian Dior would have to say about that?

11 responses to “A Three-Piece Outfit for the Holidays: Part One, The Blouse”