“A Fantasy of Fashion from Paris”

Not everyone who sews is interested in fashion history, of that I am aware.   There was, however, a pivotal moment in modern fashion history that had such an impact that its influence is still felt today, although many current dressmakers/sewers of fashions have never heard of it.  I am, of course, speaking about the Théâtre de la Mode, about which I wrote in August of 2016. If you are one of those who think fashion history is dull, I hope to convince you otherwise, by another visit to the years of 1945 and 1946, in postwar France and beyond.

In a nutshell, the fashion industry in Paris during World War II had struggled mightily due to the widespread shortages, rationing, and bare existence imposed on all Parisians during the occupation of France and even for a time after the War had concluded.  To quote from the back cover of Théâtre de la Mode, Fashion Dolls: the Survival of Haute Couture (Second Revived Edition c 2002 Maryhill Museum of Art.  Published by Palmer/Pletsch Inc. Portland, Oregon): “Liberation in the fall of 1944 after four years of foreign Occupation found Paris surviving on minimal resources.  Hoping to make a statement to the world that Paris was still the center of fashion, couturiers, jewelers, milliners, hairdressers, and theatre designers joined together to present the Théâtre de la Mode.  Using the ages-old tradition of traveling miniature mannequins dressed in current couture, the Chambre Syndicale de la Couture mobilized a whole industry with unprecedented cooperation and creativity to prove that life could begin again through these 27” tall ambassadors of fashion.  The exhibition, inaugurated in Paris in March 1945, began a long journey, first to other capitals in Europe and Great Britain, then in 1946 to the United States.”

This is the poster for the Exhibition in New York City, page 49 of the book referenced above.

Many new fashions were added to the exhibition before it traveled to New York in May of 1946. It is worth noting here some of the names of the couturiers who participated in this endeavor: Balenciaga, Pierre Balmain, Jacques Fath, Jacques Heim, Hermès, Jeanne Lanvin, Lucien Lelong, Molyneux, Paquin, Schiaparelli, Worth, Jean Desses, Nina Ricci, Jean Patou, Madame Grès, plus many, many more not as well known to us today. Its New York opening was attended, with much excitement, by the city’s diplomatic and social elite.  After the drought of fashion leadership from Paris during the War, the New York fashion industry was anxious for renewed access to Parisian inspiration and patterns, and the Théâtre de la Mode seemed to be the kick-start both countries needed.

Two of the dresses which hint at some of the changes in the air for mid-century fashions. Henriette Beaujeu designed the dress on the left and Schiaparelli was the designer for the dress on the right.

Even beachwear was included! Jacques Heim designed this ensemble of pareo pants, bra, and split skirt.

From New York, the Exhibit traveled, in September of 1946, to San Francisco to the de Young Museum, which turned out to be its final public viewing.   San Francisco at that time had a French population of over 20,000, and the response from that community was overwhelming. Sponsors of the Exhibition included I. Magnin, and two department stores (now defunct) both owned by French families, the White House and the City of Paris (who would not want to shop at that store?)  It is here that I want to pick up the story of this amazing period in time.  Hopefully I can add some details to its history and some weight to the esteem which the Théâtre de la Mode enjoyed at that pivotal time.

So what, you may ask, gives me the credence to do this?  Well, it all circles back to my sewing.  I am one of the very fortunate ones who have a room dedicated to sewing.  I, like so many of you in your own situations, spend hours and hours in this space.  It is filled not just with all the tools and machines and items I need for fashion sewing, but also with decorative objects which keep me company as I stitch away.  Over the years I have accumulated signs, millinery heads, and other fashion and sewing-related things (with support from a very understanding husband, I might add!)  I was not looking for my most recent find.  In fact, I did not even know that it existed.  However, when I saw it listed for sale on the Internet, I immediately knew what it was.  I also knew it could potentially add to the history of Théâtre de la Mode in the United States.

“IT” happens to be an original poster for the Exhibit at the de Young Museum in San Francisco, in September of  1946. 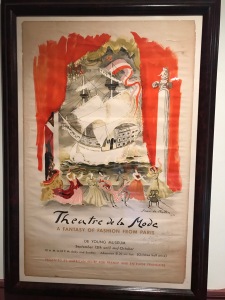 The pure visual quality of it struck me, especially when compared with the New York poster shown above.  It must have been a deliberate decision to commission an artist of the renown of Jean de Botton to produce the image for this poster, giving emphasis to the excitement and importance of this Exhibit.   De Botton (1898-1978) was a French artist living in New York City, known for his Abstractionist and Impressionist style of painting. (He became a naturalized American citizen before his death.)  I can only conjecture that he saw the Exhibit when it was in NYC, as his image for the poster is reminiscent of several of the sets on which the mannequins were displayed.  However, he added additional elements which enhance the intrigue of the Exhibit, some of which would have spoken directly to the French population in San Francisco at that time.

The image of the ship refers to the city of Paris. The latin motto of the city, “It floats, but does not sink,” appears on the ship, as seen below in the close-up.

More French imagery in the flags and pennants. 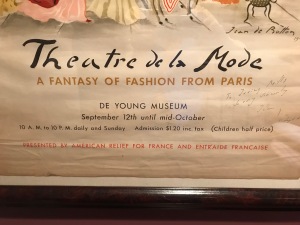 It appears that the term “A Fantasy of Fashion from Paris” was the artist’s idea or at the direction of the sponsors in San Francisco.

And what an incredible assortment of images in this section of the poster!

I feel very fortunate to have found this original poster, and to have it signed (and inscribed) by the artist makes it even more amazing. 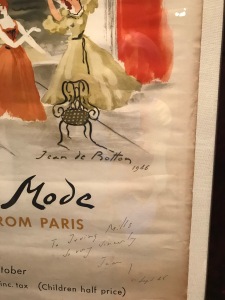 Signed by the artist in September of 1946 and inscribed to Irving Mills (1894-1985), possibly the music publisher, musician, lyricist and promoter of jazz artists who was a contemporary of de Botton’s in NYC.

No one could have imagined that the San Francisco showing of the Théâtre de la Mode would be its last public appearance. Arrangements could not be made to move it to other cities, so, in an unbelievable set of circumstances, the sets, the mannequins and fashions were moved to the basement of the City of Paris Department Store.  There they stayed, largely forgotten and thought by many to be “lost” until September of 1951 when Paul Verdier, President of the City of Paris department store made arrangements for them to be sent to the Maryhill Museum in Washington state, where you can see them now.

However, the impact of the Exhibit at that time cannot be overstated.  The concerted effort by the couturiers and others in the fashion industry to move past the barren War years realized success more quickly than anyone could have imagined. It was just a few months later, in 1947, that Christian Dior introduced his “New Look” – and the fashion industry as we know it today began to flourish.

Christian Dior changed fashion history with the introduction of this new look.

This poster is a rare survivor of a pivotal time in fashion history.  If you are still reading by now, I hope this “Fantasy of Fashions from Paris” reminds you, as it does me, of the resilience of the human spirit, its love of beauty, and its indefatigable artistic inclination.

23 responses to ““A Fantasy of Fashion from Paris””