The best laid plans sometimes need revision.  As a person who likes to make careful lists and schedules, I find it difficult at times when life conspires to upset those plans.  Especially difficult is when my sewing plans go awry!

I have been dreaming about making this coat in my treasured vintage pink wool.

With new enthusiasm after seeing the Dior Exhibit in Denver, I was sure this coat would be well underway by the end of March. However, for an unexpected, albeit happy, change of events, here we are at the end of March and all I have finished is my toile.  But my enthusiasm is still on track!

A fun part of any project in which I use a Vogue Designer pattern is devoted to finding out more about the initial debut of the pattern, and documentation of its appearance in Vogue Pattern Book Magazine.  Although I had a good hunch that this pattern was from the mid-sixties, I was quite delighted to see it included in a feature of new Designer patterns debuting in  the October/November 1965 VPBM.       .

The caption for my coat pattern, top and center, reads: “DIOR: The ensemble to wear all year – a dirndled dress and a coat that’s shaped high and narrow.”

Of course this was when Marc Bohan was the Creative Director at Christian Dior, a period of the 1960s known for its gorgeous dressmaker coats and ensembles.  Here is a sampling of some other designs appearing in the same time frame in a few Vogue Pattern Book Magazines.

I actually own this pattern, too. I have always loved the look of this coat.  This pattern is shown in the same issue of Vogue Pattern Book Magazine as the Dior design, October/November 1965.  What a great year for coats.

This kimono-sleeved coat was shown made in textured pineapple wool by Einiger. I made my purple coat from vintage Einiger wool, so I know what fabulous quality it is.

This coat features a spread collar on a low V-neck.  This coat and the one above are shown in the February/March 1966 Vogue Pattern Book Magazine.

This coat is described as being “the total look of the Chanelesque tradition.” It, too, was made from “mossy-surfaced” Einiger wool. 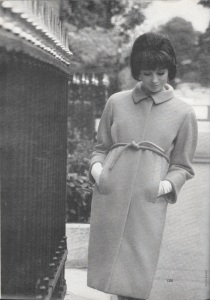 And this coat is reminiscent of the Dior design I am making, with its pointed collar, straight-shape and concealed closing. The tubular belt is a brilliant addition. This design is by Guy Laroche and both it and the pink coat shown above were included in the February/March 1964 Vogue Pattern Book Magazine.

Back to my toile: I made the first one without any alterations to the pattern.  The first thing I noticed is that the horizontal seam which extends around the back and angles up on either side of the front, seemed to add extra “baggage” in the lower back.

Here was my first toile atop the waxed marking paper. This shows the lower front and back piece, with its angled side seam.

The seam was designed to be below the waistline, but I determined it might look better on me if it were reset to fall exactly on the waist.  This adjustment would keep the spirit of the design, but would be more flattering on me for some reason.

I made another slight adjustment to the shoulder line.  First I cut the shoulder line on the body of the coat back about ½ inch on either side, to reduce some excess fabric across the upper chest.  That made some pulling in the top of the sleeves. So then I added about ½ inch to the top half/curve of each sleeve.  So it was an even swap, just distributed differently.

This shows my markings on the upper shoulder. 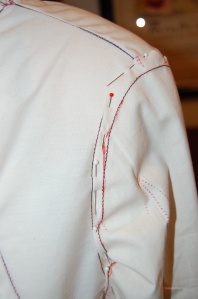 And the adjustments to the top of the sleeves.

Interestingly, the sleeves have no shaping by darts or seams on this pattern.  They seemed a bit too full to me, so I tapered the seam to reduce the width of each sleeve by about 1.5 inches.  I have had to make this adjustment to other coat patterns from the same time period, so perhaps a fuller sleeve is a hallmark of that era.  I did not want to narrow the sleeves too much, as they need to be comfortable to wear over long sleeved dresses and sweaters.

I am contemplating adding a half belt, secured with buttons to the back of the coat.  That’s a decision I’ll make as the coat comes together.  The drape of the wool, as opposed to the drape of the muslin, may convince me I do not need it, but I rather like the appearance of a back belt. 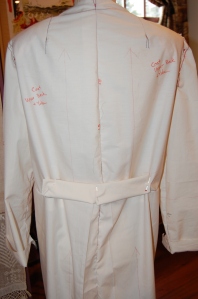 Here is a rough mock-up of a possible belt, but this needs much more thought!

I found this picture of another coat which has a high back belt, probably about the length of one which I might add. It is so helpful to find examples like this of design details. 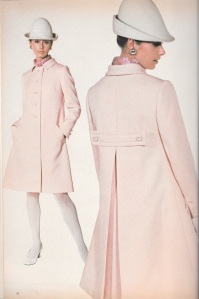 Lots of pink featured in coats from the 1960s. This design was featured in the February/March 1968 International Vogue Pattern Book.

So, I have embarrassing little to show for the past three weeks regarding this coat.  Perhaps the next three weeks may be kinder to me. We shall see!

17 responses to “The Best Laid Plans”