An Evening Jacket for the Ages

“Very up and coming” for the Fall of 1962, according to Vogue Pattern Magazine, was “the striking medium between a straight line and a bold curve – the gentle convex ‘barrel’ shaping of this coat:” 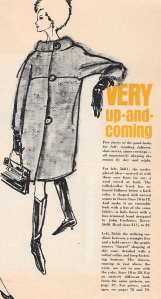 It is from this time period – perhaps a year or two later – that this Designer Pattern comes:

I don’t know many of us who want to look like they are in a barrel, so it was my intention to take the best parts of the design of the evening jacket and then adapt it to a more current look, or at least to one that did not scream 1963/64

The details I loved about it were: 1) the shaped, two-part collar, which doesn’t really look like a collar, rather as an extension of the body of the jacket, but with more definition to it:

2) the dipped back hem of the jacket: 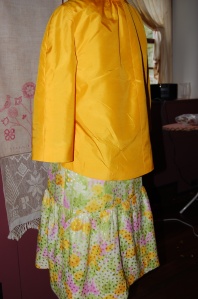 I purchased the yellow silk taffeta from Britex Fabrics, while the dress fabric, also silk, is from Mendel Goldberg.

3) the below-elbow length, kimono sleeves with their clever built-in gusset, and 4) the prominent, offset buttons:

The top buttonhole is a slot-seam one, while the other two are bound buttonholes.

Less attractive to me was the fullness of the body of the jacket.

My muslin (toile) showed me that I needed to eliminate quite a bit of that fullness from the pattern pieces. I took 2 inches right out of the back of the jacket, making for much less to be gathered into the collar:

Even with two inches removed from the center back seam, there is still enough to gather nicely into the collar.

I also took a large wedge out of the each side of the back:

The dark blue line on the left is my re-drawn seam line. The original seam line is marked in red.

Then to add a little more shaping, I re-drew the side seams in the side underarm sections: 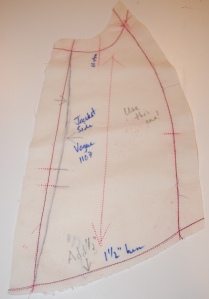 Again, the blue line on the left is my re-drawn seam line.

Because the buttons are such a prominent feature of the jacket, I knew I had to find the right ones. The pattern called for them to be 1¼” in diameter. That is a big button! I also knew they had to be a bit fancy or elegant, and I envisioned mother-of-pearl as the ideal composition. It took a while, but I found these buttons on eBay, and they looked just about perfect to me: right size, beautifully carved mother-of- pearl with a swirl design which I thought would add just the right contrast to the silk taffeta of the jacket. As it turned out, they were also the right price (always a welcome surprise!), and more beautiful when they arrived than I had anticipated:

These buttons have a substantial heft to them, making them well suited for their application on this jacket.

After getting the body of the jacket together, I tried it on to look at the length of it. Fortunately I had cut my pattern with about an extra half-inch in the length, and I used it, plus another ¼ of an inch, as it just looked better a little longer.

Another plus to lengthening the jacket is that the sleeve length lined up more attractively, something I didn’t realize until I saw these photos.

I did my usual flat applied piping along the edge of the lining:

Here is the piping sewn in place. 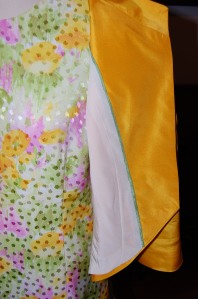 The green piping picks up the green in the dress. I opted for an off-white lining, which is a little boring but that’s okay.

And I added the label I had:

A few wrinkles left over from the jacket’s first wearing!

I’m never completely sure where pattern/fabric-pairing inspiration and decision- making comes from.  I kind of imagine all kinds of synapses going on in my brain, pulling information both stored and recently learned, which enable me to visualize a particular pattern made up in a particular fabric.  Somehow, most of us who sew  know what works – or doesn’t work – and then we can proceed, or not!  Well, my brain was telling me that this ca. 1965 Moygashel linen would look great made up in this 1966 Jacques Heim-designed dress:

Congratulations to those of you who picked this fabric in my Quiz #2!

I promise this will be the last time I show this pattern evelope!

Before I actually began work on the dress, I looked up Jacques Heim in one of my favorite reference books, The St. James Fashion Encyclopedia: A Survey of Style from 1945 to the Present. “Mr. Heim’s fashion house designed and made clothes of a modest style…” (p. 186) It appears he was not a great innovator, although he was interested in many styles, and his loyalty to a ladylike interpretation of those styles gave him staying power over his 45-year career.

Vogue Patterns started featuring his designs in the early ‘50s as part of their designer series.  It was interesting to go through some of my Vogue Pattern Book magazines and see the progression of his fashions.

In chronological order, here are four examples of his work:

This dress was featured in the June/July 1957 Vogue Pattern Book magazine.

This ladylike suit was pictured in the August/September 1958 issue of the Vogue Pattern Book magazine. 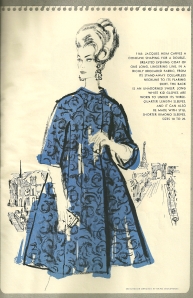 This ensemble was one of Mr. Heim’s February/March 1963 designs. The waist on the dress has a set-in chevron-peaked belt detail. Very lovely!

The pattern I chose was actually featured in one of the free “flyers” which were available in fine fabric stores in the ‘60s.  It is dated Fall 1966.  I just happened to find this copy on eBay – no one bid against me, so I guess I was meant to have it!

I felt very lucky to find this item on eBay!  Note the hair-do.

Mr. Heim died in early January 1967, so this particular pattern must have been one of the last ones which he designed or which was designed under his name before his death.  His fashion house then only lasted for 2 more years, closing operation in 1969 .

So – now on to construction of my dress.  I made a muslin of the bodice yoke  so I could check on the neckline and shoulder line, both of which seem to be an ongoing challenge for me with these vintage patterns.  Although the neck seemed to be okay, the shoulder line appeared to me to extend a little too far out over the shoulders.   So I re-cut the pattern piece, which meant that the facing had to be re-cut as well.

I had to extend the length of the armhole facing to accommodate my changes to the shoulder line.

The pattern called for the dress to be interlined, for which I chose a lightweight linen/cotton blend.  I basted all the pieces together by hand, kind of in a grid before machine basting them together just inside the seam lines.  I also basted all the dart lines, as indicated on the pattern instructions.

Here are the “bodice/yoke” pieces shown with their underlinings.

This shows my basting stitches on the dart lines.

As I got near to the end of the construction, I was very happy that I had re-cut the shoulders, but I began to sense that the neck was going to be a problem.  After I had the facings in the armholes, I tried the dress on, and yes, the neck was tighter than I wanted it to be.  I cut off the 5/8” seam allowance on the neckline and the matching part of the facing, which made it perfect!

Here is the finished dress.

Here is the back view.

A close-up of the top of the dress. I used vintage silk thread to do the topstitching. It’s very subtle, but effective, I think, particularly in person… 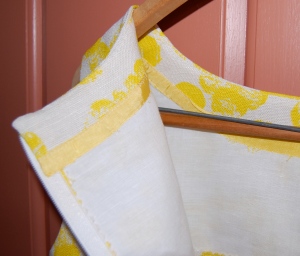 I had just enough of this yellow vintage seam tape to do the neck. It makes a nice flat finish. I sometimes do the understitching on the facings by hand. If you click on the photo, you can probably see this detail. It’s time-consuming, but makes a nice finish!

Finally, for anyone who’s interested, here’s the inside story!

I really like this dress – it’s cheery, comfortable and casually dressy – what more could one ask for?