I never expected to find a pattern from the decade of the ‘80s that I liked, as my refrain about fashions from that span of time has always been:  “Those ’80s’ styles were just too awful”.  But I humbly ate my words when I finally found a pattern (from an Etsy shop) for a sarong skirt, which just happens to be from 1985. 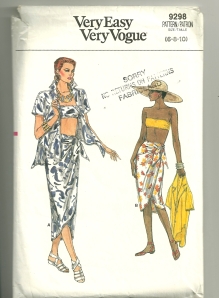 I won’t be making the bra top… And notice the “big” shoulders on the blouse, which otherwise would be kind of cute, I think!

It’s quite obvious where the Vogue pattern designer got the inspiration for this sarong and “bra-type top” look.  Here is the scoop from Fairchild’s Dictionary of Fashion , p. 395 (Fairchild Publications, Inc., New York, New York, 2010):

“Long straight wraparound skirt made of bright-colored tropical design fabric with deep fold in front, held on by a scarf around waist.  Worn by men and women of the Malay Archipelago.  Adapted as a beach dress style with wraparound skirt draped to one side and strapless top first designed by Edith Head for Dorothy Lamour film Hurricane, in 1937.  Worn by Lamour in many films of the 1930s and 1940s. [my emphasis]

This sketch accompanies the entry for sarong skirt/dress in Fairchild’s Dictionary.

The original owner of the pattern made the long version skirt while I decided to make the shorter version.  She left cryptic notes throughout the instruction sheet.

Here is an example of some of the notes which the original owner made on the instruction sheets.

I made some of my own notes, but I wrote them on the muslin which I made to test the pattern before cutting into my fashion fabric.   I am glad I did, too, as I discovered that the overlap for the skirt was not quite enough for a “street” skirt (as opposed to the beachy/resort intent of the pattern).  So – I made the side panels each about 2” wider.  Then to make the waist still work, I added a dart in the left side front (which is the hidden side of the wrap).  I  made the ties each about 2 inches longer, as I thought they would be more becoming and lay flatter if they had a little more length to them.

Here is the diagram from the envelope which shows the thumbnail details of the two skirts.

I had picked out this tropical-look fabric, ordered a swatch, then the yardage from B & J Fabrics in New York.

Here’s how it all turned out:

Not quite Dorothy Lamour. 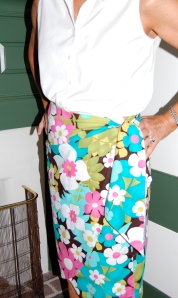 A close-up view, showing the ties.

When I was putting my new skirt in my closet, I spied my chartreuse green Tommy Bahama top, which is almost vintage itself, it’s so old.  But, h-m-m-m-m, the wheels started turning and I paired the two together here:

The green in the top actually matches the green in skirt better than it shows here. Just wish I had some green shoes to match…

16 responses to “Eating my words.”