One of the aspects of fashion sewing that appeals to me so much is how projects seem to take on a life of their own. By the time I have it finished, a piece rarely ends up being exactly how I thought it might be when I started it. Most of the time, that’s a good thing. (There are those flops, which are bad things, but thankfully this post is not about a flop.)

When I did the planning and started the construction of my recent Classic French Jacket, I really thought I would be making a pale blue linen sheath to wear with it, using fabric already in my collection. But somehow that pink accent in the weave of the boucle, the trim I selected, and the buttons, all conspired together and changed my mind for me.

Fortunately, I also had a piece of pale pink linen in my fabric collection (at this point, I might ask myself, what color linen do I not have in my collection? But let’s not go there….) By this time I had already decided I needed to figure out a way to show that gorgeous lining silk in my jacket, rather than having it solely hidden inside. Having seen accent scarves paired with Chanel jackets on Pinterest gave me the idea to make a scarf. Then I thought it might be fun to “attach” the scarf to the pink (planned) dress in some fashion.

I came up with buttoned shoulder tabs as a possibility. I had purchased eight small buttons for my jacket – three for each sleeve and one for each pocket, long before I had this idea. You might recall in my last post, that I decided to make the sleeve vents for two buttons instead of three? That’s where I found/got the two buttons I needed for shoulder tabs. 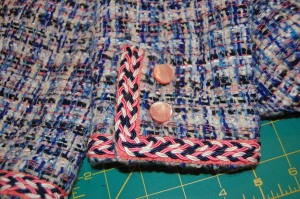 I ended up liking my two button vents!

The first tabs I made just did not look right. First of all, they did not turn well, with a pleasing curve And when I placed them at the neckline of my dress, all I saw were the seams.

I even finished the bound buttonholes before deciding I didn’t like these.

I had to think through lots of possible solutions and finally had a eureka moment when I thought of piping the edges. 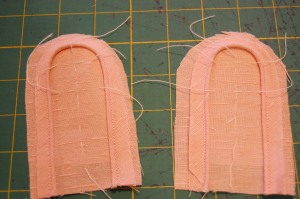 Piping makes the sewn curve much easier to turn well. 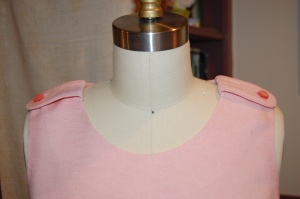 I placed the tabs slightly forward rather than exactly on top of the shoulder seam. 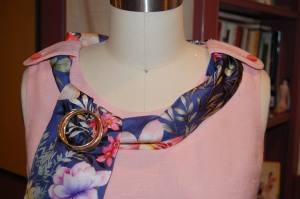 Being a lover of pink, I already had pink pumps that match the dress exactly – and a handbag which brings out the peachy part of the pink in the boucle. 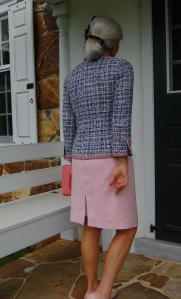 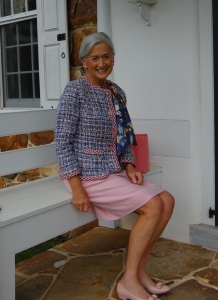 The tabs on this dress give it kind of a ’60s vibe. Unintended, but kind of a nice touch to go with the jacket.

Because these two pieces – and this look – came together from so many sources, I think it is a good idea to give credit where credit is due:

Cotton/linen lining for the dress: JoAnn’s Fabrics, purchased in bulk a couple of years ago

I do love pink!

So that’s it! One major project now residing in my closet rather than in my sewing room. Time to start something new…

33 responses to “Jacket AND Dress!”