Coco Chanel said it herself, “I am against fashion that doesn’t last.”  Could she possibly have known her Classic French Jacket would become such a lasting icon in the annals of fashion and style?  Would she be amazed at how often her jacket has been imitated and copied – for decades now?  And could she possibly have ever guessed the allure this style has for those of us who sew fashions for ourselves?

I really do not know the answers to these questions.  From what I do know of this enigmatic woman, I can only guess that privately she may have suspected her creation had staying power far beyond most fashions. And certainly, as I have said before, “only Chanel is Chanel,” but what a blueprint she gave to those of us, either as individuals or as fashion companies, to copy and to change and to make her classic jacket into our very own.

I have been thinking about Coco Chanel quite a bit these days as I work on my fifth Classic French Jacket.    Last Fall,  about the time when I was getting ready to cut out my #5, The Wall Street Journal had this feature article on “Chanel-ish” jackets. 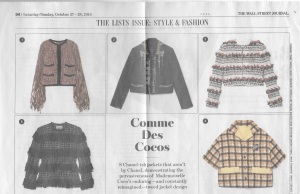 This article appeared in the Weekend Section of The Wall Street Journal, October 27 – 28, 2018. The center caption states: “8 Chanel-ish jackets that aren’t by Chanel, demonstrating the pervasiveness of Mademoiselle Coco’s enduring – and constantly reimagined – tweed jacket design.”

The featured  jackets range in price from a “zara” version at $129 all the way up to a Gucci one at $13,500.  I suspect few, if any, of these jackets are channel quilted as a real Chanel would be, but they all have that familiar, yet varying look that is so recognizable – the tweed or boucle fabric; the embellishment in the form of fringe, trim, and buttons; the boxy or minimally shaped profile; the symmetrical, balanced demeanor; and the ability to be worn casually or dressily.

Just about any women’s fashion catalog you open has examples which relate to Coco Chanel’s jacket. For example, in the span of just three pages of a recent Gorsuch catalog, four jackets have that classic Coco look. 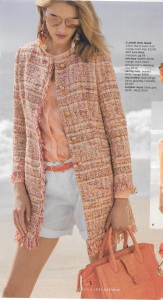 A longer version of the classic jacket, its roots are immediately recognizable.

Another longer jacket which would look equally at home with a lace dress or, as shown, with denims. 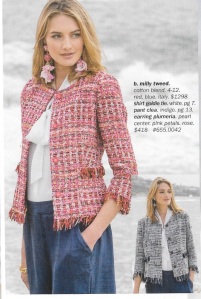 And a traditional shorter jacket, shown in two colors. All these examples are in the Gorsuch GETAWAY catalog, Winter of 2019, pages 30-32.

Those of us who make our own Classic French Jackets are privy to the reality of hours of hand-sewing and unusual construction techniques inherent in one of these jackets.   These are not fast projects.  However, the pleasure of taking this classic design and having the stylistic freedom to choose and decide on all the components, while adhering to the “rules” of the basic style, make all those hours worthwhile.

Or so I tell myself! Here is where I am with my #5: quilting completed, lining fell-stitched in place as much as possible, sleeves assembled and ready to sew onto the body of the jacket. 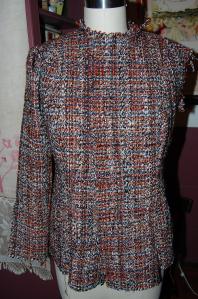 Here the right sleeve is just pinned at the shoulder. 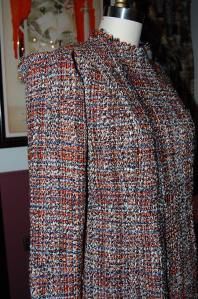 It is always a relief when I am sure the sleeves are going to match the plaid of the body of the jacket. 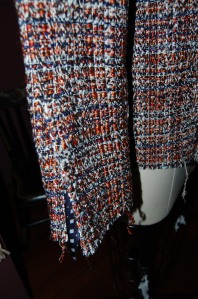 There is something about the shaping of these three piece sleeves, with vent, that is just so lovely.

I am still deciding on trim for this jacket, although I believe there is going to be fringe on this one.  Perhaps a two-sided fringe with a pop of coordinating color between the edges.  It would be fascinating to know what would Coco suggest.  But then, it is such personal decisions which give these jackets their individuality. 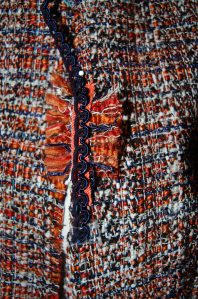 I will be deciding on either Petersham ribbon or velvet ribbon as the underlay in the center trough of the fringe. It has been quite a search for the best color to use.

Coco Chanel was also known to have said, ”One cannot be forever innovating.  I want to create classics.”  Well, that she did with her classic jacket.  And we are all the beneficiaries of her genius.  Her idea, hatched in the 1920s, then defined to its current look in 1954, is an old idea which is continually reimagined and reformulated by those of us fortunate enough to sew.  Merci, Mademoiselle Chanel!